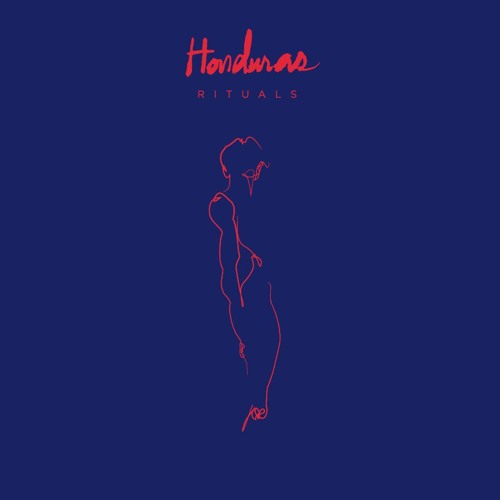 Rituals, the debut album from Brooklyn dream-punk quartet Honduras, is out now on Black Bell Records!  We worked on this record last fall/winter – recording live to 8-track tape in upstate NY at Outlier Inn, and mixing/mastering in Brooklyn at Doctor Wu’s – and were all thrilled with the results.  Brash and immediate, lovely and catchy, the record captures the energy of these songs and finds the group exploring new territory in the process.  Interview Magazine and NME streamed the record, both The Fader and BK Mag ran features on the group, and they’re wrapping up a tour with Oberhofer – go see them in your town!  Re-listening to Rituals now, I remember why I was so excited making this record, and look forward to getting back into the studio with them this winter.  Stream Rituals from one of the links above, and check out album-closer and personal-favorite “Mirror” below:

Dan Friel‘s new album Life is out October 16th on Thrill Jockey Records.  I mixed this wild instrumental noise-pop record with Dan earlier this year, and as a fan of both the man and his music, it was a real pleasure to help bring this thing to… well, life.  Fact Mag and Stereogum debuted the first single “Life (Pt.1)”, and NPR premiered “Rattler” in their column “Songs We Love”, throwing in a Sonic Youth comparison for good measure.  The album was mastered by Sarah Register, and “Rattler” is available to stream below.  Also, make sure to check out Dan’s interview and in-studio performance on WNYC’s Soundcheck!

Service Industry, the sophomore LP by NYC outre-rock duo Lushes, is also out October 16th, via Felte Records.  I worked with the group to flesh out the recordings with synth arrangements and effect treatments, yielding some interesting results and avenues of exploration.  In addition to the first single “Low Hanging Fruit”, Tiny Mix Tapes and Self-Titled Mag premiered “Circus” and “Rub Your Eyes” (streaming below).  The album was recorded and mixed by Aaron Mullan, mastered by Sarah Register, and features Sam Hilmer (Zs, Diamond Terrifier) and Justin Frye (PC Worship).

PC Worship shared the first taste of Basement Hysteria with “My Lens” (via The Fader).  It’s a 13-minute doozy of a track, an example of the more stripped-down and stretched-out vibes from the new EP (which I mixed and mastered this summer).  The group is on tour in Europe now, with NYC dates supporting Panda Bear, Container, and The Men this fall.  Basement Hysteria is out November 13th on Northern Spy.

Godmode Records are releasing a series of EPs by their artists entitled You’ve Been Sweating Wrong Your Whole Life, many of which I mastered earlier this year.  Yvette is a NYC electro-noise-rock duo I’ve been a fan of for years, having gotten to know them and sharing the stage with them multiple times, and their new Time Management EP is absolutely ferocious.  Pitchfork and NME featured the single “Calm and Content”, and Noisey and Stereogum hosted streams of the EP in its entirety.

Other releases in You’ve Been Sweating Wrong that I mastered include Hand of God’s Int’l Shipping EP (“trippy MPC house jams”), Fasano’s The Beach EP (“left-field b-boy crooning”), Fitness’ self-titled EP (“freakshow electro”), Soft Lit’s self-titled EP (“3am breakup pop”).  Malory’s self-titled EP is also a part of the series, and was mastered by Stuart Hawkes.  Kudos to label-head and producer Nick Sylvester for his creative sounds and direction on this wide-range of EPs!  Click on each of the above links for a stream and write-up of the release, and head over to Godmode’s store to order the series.

VBA recently issued their debut EP Will It Still Be There.  I worked with the group earlier this year at Seaside Lounge and Doctor Wu’s to record and mix these songs, which push the boundaries of rock into more experimental textures and form.  The group finished vocals and arrangements this summer, and mastered with Josh Bonati.  Stream the album below, and keep an eye out for them around NYC this fall.

Fort Lean released their long-awaited debut album Quiet Day last week on Ooh La La/Caroline.  My studio partner Jake Aron plays bass in the band, and I watched as they spent years crafting this album of immaculate indie rock.  The album was recorded and mixed at a variety of studios, including Dreamland (in upstate NY) and Strange Weather (in Brooklyn).  I did additional mixing with Jake at Doctor Wu’s, and the record was mastered by Chris Gehringer.  Check out their series of utterly bizarre videos by Mike Anderson (think Tool meets Beetlejuice), and stream the album sampler below:

Humeysha came by Doctor Wu’s to master their self-titled debut LP with me last month.  The Fader premiered the surreal video for the first single “Burma Between You and Me”, a great sampling of the New York via New Delhi sounds on this unique record.  Humeysha is out now on Camp & Street.

I also mastered the new Polly Hi album Deceleration at Doctor Wu’s.  The record was produced/recorded/mixed by Andrew Lappin, a regular and friendly presence at the studio.  Fans of Here We Go Magic and Wilco take note – this is spacious, grooving, beautiful stuff.

MPHO came into Doctor Wu’s last month to mix and master their new EP T.I.G.H.T..  They’re a new synth-pop group comprised of Mark Perro of The Men/Dream Police, Holly Overton of Juniper Rising/herself, and Russell Hymovitz of Junk Boys/Dream Police.  I’ve worked with these three multiple times, it’s always fun, and it’s been great to watch this project develop over the last year. T.I.G.H.T. is a gritty and gleaming sampler of disco power-pop – check it out!

Apart from all that, I’ve spent much of the past couple months focused on Eaters.  We did another run of shows with Shabazz Palaces, including a fantastic home-town show at the Music Hall of Williamsburg (check out these awesome photos by Impose).  Our sound-sculpture Moment of Inertia was featured in both The Creators Project and The Spec, and we’re planning a couple sound/art installations in the new year.  We’ve also been hard at work completing the next full-length – I’m not sure what to say other than I can’t wait to share it with everyone!  In the meantime, Eaters are playing a couple shows around CMJ this month – October 16th @ Cake Shop (Inland Empire Touring showcase w/ Turn to Crime, The Gotobeds, Spray Paint and more) and October 18th @ Silent Barn (Dull Tools/Wild Wild Life party w/ Future Punx, Pill, Beth Israel, and many more) – come hear the new stuff!

Please feel free to reach out if you’d like to talk about sound, and thanks, as always, for reading. 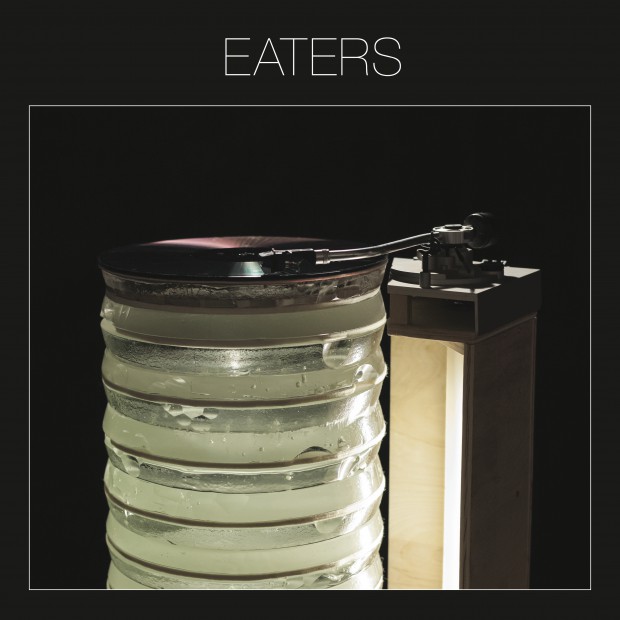 Moment of Inertia, the new EP from my group Eaters, is out now via Driftless Recordings.  The EP is an audio-video document of a sound-sculpture conceived by visual artist, group member, and old friend Christopher Duffy (who is also responsible for the on-stage sculptures at our live shows).  I’ve tried describing it many different ways, so perhaps it is best to quote the statement we prepared:

A large cylinder of glass serves as a manually-spun platter for an altered turntable, playing an original composition cut to acetate. Void of a motor of any sort, the turntable slows over the course of the composition, eventually coming to a complete stop. Throughout the experience, tempo and pitch fluctuate, exploring perceptions of speed, elasticity, and entropy.

Brooklyn Vegan premiered the EP last week, coinciding with more shows with the always-incredible Shabazz Palaces.  Check out the video (a single shot of the sculpture in action) and audio (three different versions of the compostion) below.  Special thanks to Steven Probert for shooting the cover image and video and to Josh Bonati for cutting the acetate.

Parquet Courts recently announced their new EP Monastic Living.  The recording was done at Sonelab and in their practice space (by band member Austin Brown), and Austin and I mixed and mastered it last month at Doctor Wu’s.  I don’t want to give too much away, but it’s a weird one!  Monastic Living is out November 13th on Rough Trade.

Stereogum recently announced the new Lushes album Service Industry.  I spent some time with the group this past winter, developing synth parts and treatments across the record, which was recorded and mixed by Aaron Mullan (Sonic Youth, Tall Firs, et al).  The album comes out October 16th on Felte Records, and you can stream the first single “Low Hanging Fruit” below.

Also coming soon: Do You Remember Real Pain, one of two new EPs by Rat Columns (aka David West).  I met David when Eaters and Lace Curtain (one of his many other projects) toured together last fall, and we started mixing when we got off the road.  I mixed and mastered 4/5 songs for the EP (which you can stream below), to be released August 20th on Adagio 830. (His other EP – Fooling Around – is out now on Blackest Ever Black).

Honduras just released a video for “Paralyzed”, the first single from their upcoming album RItuals. I produced this record a while ago – recorded upstate at Outlier Inn, mixed/mastered at Doctor Wu’s in Brooklyn – so it’s excited to see pieces of it shared with the world.  It’s a great record, and though it sounds like we have longer still to wait for the full thing, you can check out the video and audio for “Paralyzed” now.

I wrote about this in my last post, but there has now been an official update to the delayed Optimo Music post-punk compilation that I re-mastered and restored along with Michael Train this spring.  Originally titled Now That’s What I Call DIY! (Cult Classics From the Post-Punk Era 1978-82), the double-LP collection was set to be released this month before Sony – who is behind the series Now That’s What I Call Music!  – issued a cease and desist.  Optimo couldn’t reach an agreement with Sony’s lawyers, so all of the original packaging has been destroyed and the title has been changed to [Cease and Desist] DIY!  The compilation is truly great, so I’m pleased to announce that it has a new release date of October 30th.  Read more of the story and the full track-listing on Pitchfork, and check out a sampler of the collection below.

I also worked with Michael Train to restore and remaster the long out-of-print back-catalog of late 70s/early 80s Aussie post-punk group the Sunday Painters. The first reissue in the series was a collection of early singles called In My Dreams, which was released earlier this year.  Their two subsequent full lengths – Something to Do and 4th Annual Report – are coming out August 28th via What’s Your Rupture.  As with In My Dreams, these reissues have been lovingly restored and feature bonus downloads of never-before-heard live recordings.  Check out “Something to Do” and “Shattered Lens” below.

After mastering the compilation American Music this spring, I recently mastered five different EPs for GODMODE Records, one of my favorite local labels.  Yvette, Soft Lit, Fitness, and Hand of God all have new EPs coming soon; Fasano’s The Beach EP is out now (streaming below).

I recently spent a few days in the studio with Junk Boys, recording/mixing/mastering a full-length record as a follow-up to the EP we did this winter.  It rips!!

I also mixed a commercial for director Robin Comisar (creator of the short Mom Died that I sound designed and mixed).  The commercial is for Crossfit, and features a 79 year old woman using the fitness program for rehabilitation.  The ad is playing on ESPN, and you can stream it on Youtube as well.

Thanks as always for taking the time to read this!  Much more in the works – finishing the next Eaters LP; lots of records; maybe some short films; and hopefully some more beach time before the end of summer!